We didn’t find Coronado’s Seven Cities of Gold (either), but we DID find crystal colored white sand, underground, glistening, gypsum caverns and our first circular Capitol building! New Mexico is beautiful and all the people were nice.  We’re coming back to catch Albuquerque’s  hot air balloon festival.

San Miguel Mission is a Spanish church in Santa Fe, New Mexico.  It was built in around 1610 and is the oldest known church in the United States.  It was burned during the Pueblo Indian Revolt in 1680 but rebuilt when the Spanish reclaimed the area.  There is a wooden statue here of Saint Michael that dates to 1709.  There are also very old paintings, which were done on bison and deer skin, from the 1600’s.  The original adobe walls are still underneath and you can see them through windows into the floor next to the alter.  This church is located on the East side of the “Santa Fe Trail” in Santa Fe.  It is in the “Barrio De Analco District”.  This district is where some of the Warrior Indians, who were traveling with the Spanish soldiers later, lived.  They grouped together in houses that had been previously occupied by Pueblo Indians of the 1200’s.  Even though the Church is Spanish, you can also see houses from the Indian Barrio that are still standing and thought to be some of the oldest homes in America.  They are made of adobe. The new picture here is the “Oldest House” today.  The old picture shows it in the 1800’s (although it is much older than that and the foundation is from 1100)

Santa Fe, New Mexico is a main city here.  There was a historic trading  route that ran between Independence, MO and Santa Fe, NM.  It was known as the Santa Fe Trail.  Pioneers and traders used this route to help settle the west.  At the time, New Mexico was a territory and not a state.   People from Mexico City, and Texas also used Santa Fe as a trading hub.  Santa Fe is along the Rio Grande. 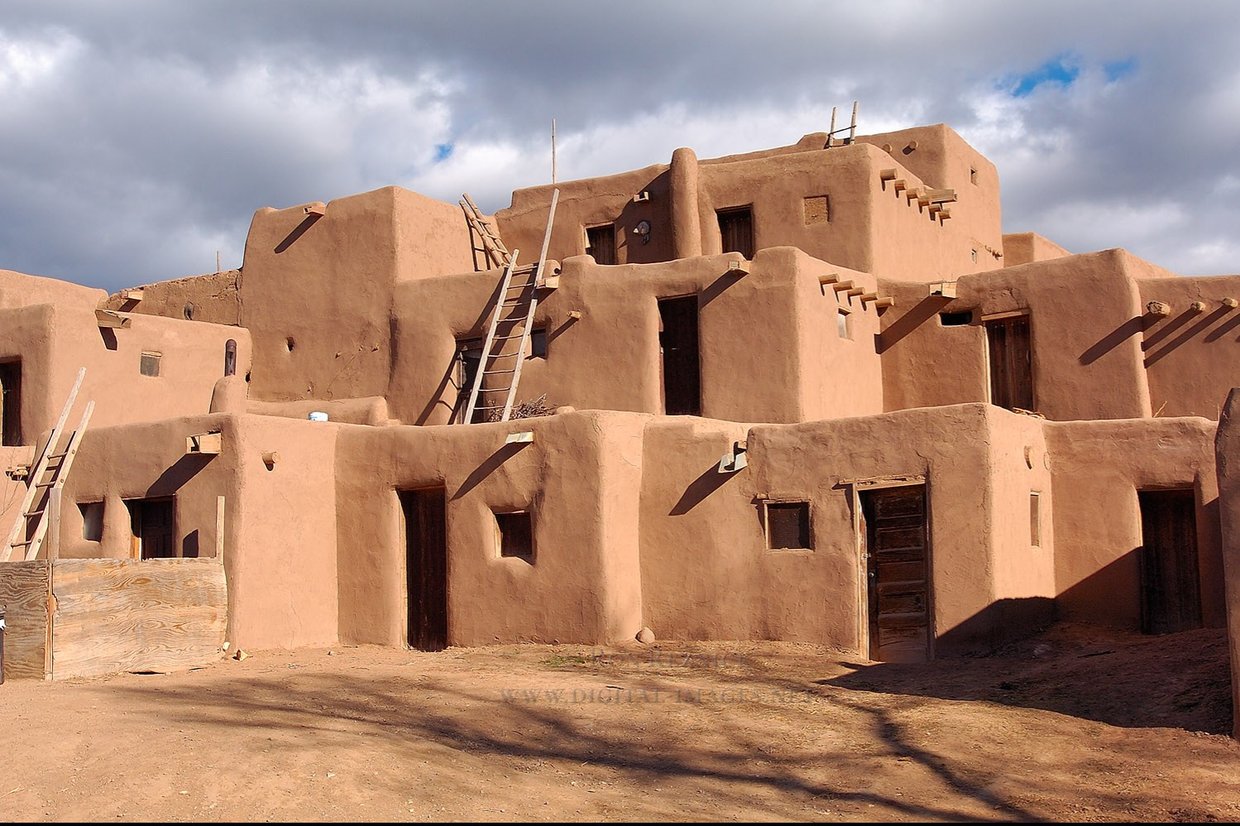 Spanish people that visited this area called the structures the Native People were living in “Pueblos” which was the Spanish word for “towns”.

The term “Pueblo Indian” refers to Native Indians from this area that lived in this type of dwelling.  It does not refer to a specific tribe.  Today there are 21 different remaining tribes of Pueblo Indians including Zuni and Hopi.  The Pueblo Indians were not removed from their lands, so they live on reservations here in New Mexico in their original ancestral home areas.

Pueblos are built from Adobe Bricks.  The bricks are made from stone, sand, mud, and clay and mixed with animal hair or straw.  They are then baked in the sun.

A petroglyph is a carving in stone. Petro comes from the Latin word stone. Glyph comes from the Greek word for carving/etching. So, it would end up being Petroglyph (Stone Carving/Etching). There were five volcanos in this area which created molten rock. Later, the Aztecs, Pueblo Indians, and even the Spanish came here, carving petroglyphs into rocks. The Aztecs did geometrical carvings, the P Indians did animal carvings, and the Spanish did the Cross to signify Catholics. The Spanish wanted to make everyone Catholics but not everybody wanted to be Catholic. At the place, we saw a Jackrabbit. There are many thousand petroglyphs there.

The State Capitol of New Mexico is in the Northern city of Santa Fe.  This city is at the end of the “Santa Fe Trail”, connecting Independence, MO in the East to Santa Fe, New Mexico.  Santa Fe is also almost at the end of the “El Camino Real” the road that connected Mexico City to San Juan Pueblo, NM.  Those are probably two big reason’s it’s the Capital City, even though it isn’t the largest city in NM.  The Capitol is a very interesting shape.  It doesn’t have a “capitol” (or dome).  It’s built in a circular shape just like the Zia Sun Symbol which is the State’s symbol.  It very peaceful in the State Capitol; it has artwork everywhere, it’s colors are calming, and there weren’t a lot of people everywhere.  The state gem is turquoise, and there is turquoise in the exterior door handles.  The outside of the building is in a Pueblo style, which is made using adobe blocks.  It’s a great place to take a nap and look at artwork!

Gila (pronounced “Heela” Cliff Dwellings are along the Gila River in the Gila National Forrest.  It takes a very long time to get here; the location is in the far west of New Mexico and high in the mountains.  Once you get to the bottom of the Gila Forest it still takes two hours to go up the winding roads.  We felt carsick at the end!  The Gila Cliff Dwellings were lived in by Native American Indians as far back as 1240 A.D.  There were different groups that lived here.  The longest anyone lived in the caves was about 40 years.  You can see the black smoke on the ceilings from the fires long ago.  You can also see the original adobe walls used to section off the caves, and a few pictographs. The people living here were about 5’2″ tall and very skinny.  They used very narrow walkways between the caves.  They had to carry food and water up to the caves which would have been a lot of work. The Native Americans who lived here were not Pueblo Indians, they were Mogollon’s.  They must have met Pueblo Indians though, because there is one Pueblo “style” door cut into one of the adobe walls (sort of a cross or T shape).  The cliff cave provided safety and shelter for the people.  No one knows why they left, but since they were farmers it is assumed draught made them leave to find better land.  The Gila River runs right by the cliffs.  They aren’t too steep to climb up to, but the rocks are slippery coming down.

This is a picture of a “collared lizard” that we found (actually four of them) in the Gila National Forrest.  The puffed up and tried to intimidate us.  It didn’t work as you can see!  Later I found another smaller lizard with a blue throat.  I was chasing him while he was on a fence.  After a while I leaned down to look for him but couldn’t find him.  He climbed onto my hat when I wasn’t looking.  My mom had to tell me he was sitting on my head!  He was taking a free ride and hiding at the same time.