These are two photos from Temple Square in Salt Lake City, Utah.  One is the inside of the Mormon Tabernacle where the Mormon Tabernacle Choir practices.  This is the organ in the chapel and the choir practices on Thursday nights.  The other photo is of the LDS/Mormon Temple.  It was finished in 1893 and is still used today by the church of the Ladder Day Saints (the Mormons).

A picture of Seraph Young voting as the first woman to vote in the Utah Territory in 1869 is on the wall.

The Utah State Capitol Building has Georgia Marble inside.

Brigham Young was the first Governor of the Utah Territory.  Most of the artwork in the State Capitol was painted by an unemployed artist during the Great Depression.

This room is the State Reception room and is used on formal occasions.  There are lots of pieces of antique furniture here.

This State Capitol has many windows, especially in the ceiling so it has lots of natural light.

The State Capitol Building is on top of a hill, and very easy to walk around.  It is in what is known as “Temple Square” in Salt Lake City.

Einstein07 Especially liked the statues below so he took a picture of each one.  They stand for Immigration and Settlement, Land and Community, Science and Technology and ARt and Education.  The “BEE” is the state symbol and was chosen because the BEE represents “Industry” – not because there are lots of “bees” in Utah (as we found out – FINALLY!)

OK I think these pictures speak for themselves!  After going to the world’s largest open pit mine (almost!!) and ALMOST falling off a cliff in the mountains, and baking in the sun – we thought we deserved to see the other side of Draper, UT.  This water park was right next to our hotel.  How could we NOT go?!!!  After all, it IS summer?!!! 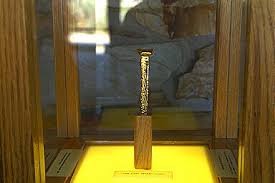 Salt Lake City is named after the Great Salt Lake that is here!  This lake is salty like the ocean.  Many years ago, this area was covered by an ocean.  When the ocean evaporated, salt was left in the mountains.  That salt washes down when it rains and when the snow melts.  Parts of the Salt Lake are saltier than others, depending on how much additional fresh water is added.  In the north, the lake is almost 35% salt.  The amount of salt in the lake takes up more room in the water, and makes your body more buoyant.  You float much better – even here in the southern part where there isn’t as much salt as the North.  We went to Antelope Island State Park.  This park has a special bridge that was built to get to it.  The smell is pretty bad as you cross the bridge, but it isn’t as bad once you get to the lake.  Very few things grow here; mainly special shrimp, bugs and the birds that eat them.  You can see all the bugs on the ground as I’m running through them on the “beach”.  The birds fly by with their mouths open and scoop up the bugs if you scare them.  We didn’t see any antelope, but further back on the island there are both antelope and bison.  It’s really nice, but this is “no-see-um” season so we had to watch out for the bugs.  Yes, we were covered in salt when we got out of the lake.

The Bingham Canyon Copper Mine is the largest and deepest open pit mine in the world.  It’s one of only two man made things that can be seen by astronauts from outer space (the other is the Great Wall of China).  The visitor center here is closed because they had a rock slide!  We found a back, secret way into what was supposed to be an overlook.  You had to go around a mountain, through a canyon.  We got about 2 miles from where the actual lookout was supposed to be.  It was so scary to drive it, that we abandoned the trip until Dad could drive us!  The pictures of the trees are what I took of the long way down from our road!  We were on a narrow, mountain road winding around the mountain with no railing.  Only one car at a time could fit, and mom didn’t want to have to back down the mountain if someone came!  We found a picture of what it looks like INSIDE the mine.  Since this is just a little bit south of Salt Lake City we hope we will come back and see it next time we visit.  For now, we are going to post someone a photo someone took of the inside.  You can see the huge trucks coming around the outside of the mine carrying ore.

Zion National Park is in Southwest Utah.  We visited at a very busy time of year.  There wasn’t a single parking place in the entire Park!  We stayed in the Lodge which is a only way to get a parking place!  It’s also very hot unless you do your hiking early.  We hiked 3 miles in the morning on a trail called the Emerald Pools.  It takes you up under waterfalls and into a desert oasis with three pools along the way.  At the top, you almost want to quit but if you make it like we did – you find a great place to rest and catch tadpoles in the top pool.  The waterfalls are much bigger in the Spring.  They are still going now, though.  In Zion National Park there isn’t much light pollution.  We went out at about 10 PM.  and saw the sky covered with stars!  There were about 10 deer eating grass right in front of us.  This park used to be covered by an ocean.  Instead of the ocean evaporating, the earth was actually pushed UP to make these rock formations.  Then, over millions of years, the water drainage and rain and snow melt continued to erode the rocks to the shapes we see today.  There are many layers that can be seen in the rocks and many places to do great hiking and rock climbing.

We a great time in Nevada!  Lake Tahoe is beautiful, the State Capitol is relaxed, Virginia City is interesting, Ely is historic, the Great Basin is quiet, and Las Vegas is fun! We’ll be back to camp and star-gaze at the Great Basin National Park and also shop and play in Las Vegas (when it isn’t 118 degrees!)  We’re in Utah now, having fun.

The Hoover Dam was built during the Great Depression.  It was originally called the Boulder Dam but then renamed after President Herbert Hoover.  It is fed by the Colorado River and 1/2 of it is in Nevada and the other 1/2 is in Arizona.  Over 100 people died while the dam was being built.  The Colorado River is what runs through across Arizona, cutting the Grand Canyon.  It then cuts up and runs up to this Dam.  The dam provides power for Las Vegas, Nevada and irrigation for Nevada.  This Dam shape is called a concrete arch-gravity dam.  We would like to recommend coming to the Dam during a month other than June.  It was 118 degrees here, and all the tours were cancelled.  People were being picked up for heat stroke as we looked at the dam!  Einstein07 said he was surprised by the way the Dam looked, and thought it would look more like a type of “beaver dam”.